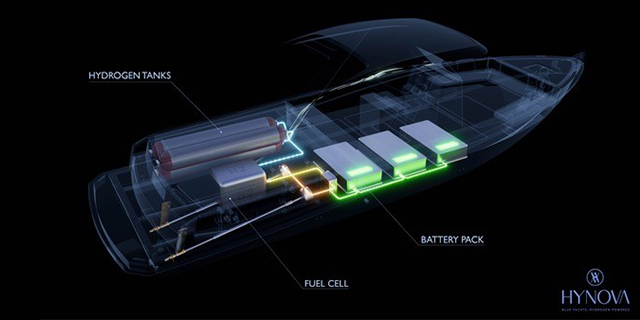 At the environmental symposium held today Thursday 25 March at the Monaco Yacht Club, La Ciotat Shipyards announced that, following a competitive bidding process, the pioneering hydrogen propulsion company HYNOVA has been offered the business unit lot 14 in the Yachting Village on the La Ciotat Shipyards site. The multidisciplinary jury assembled for the exercise was mostly won over by HYNOVA’s ambitious project to design and build a boat that will incorporate a propulsion system powered by the «green» fuel hydrogen.

The call for projects inviting companies to submit proposals for the occupation of lot 14 in the Yachting Village was launched last October to select « an innovative company capable of reducing the environmental footprint of large yachts and / or La Ciotat shipyards. »

This objective for the LCS Yachting Village, a 100% subsidiary of La Ciotat Shipyards (LCS), was achieved when, on Wednesday March 17, 2021, the name of the winner, the company HYNOVA, was named. The company is developing an innovative leisure craft powered by environmentally friendly hydrogen.

The announcement follows the deliberations of a panel of experts drawn not only from LCS but also from GICAN (Groupement des Industries de Construction et Activities Navales), from the management of the companies of the Aix-Marseille-Provence metropolis and from the WeOcean environmental association. They were tasked with assessing the applications according to three criteria: the economic feasibility of the project, its impact in terms of jobs created, and its environmental sustainability.

Among the members of the panel, LCS Yachting Village was able to count in particular on GICAN, which has developed a strategic vision of the future of the industry at the national level.

« GICAN is happy and proud to be fully associated with the commitment of its member La Ciotat Shipyards to nurturing on its site innovative companies whose activities will help reduce the environmental footprint of the naval industry” said Mr. Philippe MISSOFFE, General Delegate of GICAN. “Thanks to a discount on the rent for the first two years, lot 14 represents a real aid to industrial development. The selection of the young company HYNOVA involves the ecosystem of La Ciotat Shipyards in the dynamics of hydrogen, a technology that is full of potential for the French maritime industry and fully aligned with its dual objectives of achieving energy-efficient transition and economic competitiveness. »

The “bet“ on green hydrogen.

Founded in 2020 by Mrs. Chloé Zaied, HYNOVA is being offered the opportunity of occupying, after an initial contractual development phase, lot number 14 in the Yachting Village. This is a completely new, 470 m², premises which will be completed this May. The company will then have three years to consolidate and demonstrate the viability of its business model. This objective will require the solidification of sustainable technological and financial partnerships, but the development prospects are commensurate with the level of risk of the project.

HYNOVA’s initial goal is to begin the building of three boats in the first year and to complete eight within three years. “Beyond that we will have to push the boundaries” underlines Chloé Zaied. “Personally, I am dedicated to the preservation of the fabulous environment of the Parc des Calanques. I was committed to hydrogen before I learned of the recovery plan because I dreamed of vessels that would emit nothing but water. We will continue to work to improve our product to find ‘clean’ solutions throughout the entire boat lifecycle, even though it is a complex challenge“.

The choice of the HYNOVA project is the result of an in-depth analysis of the benefit / risk balance of the project, and the members of the jury did not fail to point out the many pitfalls that HYNOVA will have to overcome. On the plus side, Sandra Servière, LCS representative on the jury, observes that: “Green hydrogen is a technology on which all the big names in the maritime industry are working at the moment. HYNOVA therefore presents a great opportunity for La Ciotat to be at the forefront of this movement.“

Taking an alternative perspective, Leslie Bissey President of the WeOcean association is more cautious: “While the HYNOVA project is undeniably ambitious, it will however be necessary that the undertakings that it has given regarding its capacity to deploy a solution based on clean hydrogen on a large scale are met!“

Philippe Missoffe, General Delegate of GICAN, adds his support: “With this decision we are taking another step towards the greening of our industry. We hope that HYNOVA is a great success and, together with other companies active in the sector, boosts adoption of the technology and the local deployment of the entire low-carbon hydrogen value chain.”

Jean-Yves Saussol, Managing Director of the shipyards, notes the convergence of the HYNOVA project with the industrial strategy being implemented across the territory which favours the hydrogen sector and observes that “the selection jury took a clear-eyed look at the risks presented by the economic and technological aspects of the project. Despite those, the majority opinion that resulted from the panel’s deliberations was that this is a bet worth taking, because it is by taking calculated risks that one can achieve great things.”

In addition to the HYNOVA project, the panel also drew the attention of LCS to the application submitted by the company IADYS, which was placed second in the competition. Given its technological know-how and its positioning in the fight against marine pollution, this company could well be of interest to the Ciotaden industrial ecosystem.

“Our call for projects has met all its objectives, with a number of excellent candidates coming forward. I see the fact that a vigorous debate took place within the panel as a very good thing because it allowed to the judges to explore in detail the two finalist projects. We are very happy to welcome HYNOVA to our sites and we will be following its progress closely” concluded Patrick Ghigonetto, President of LCS representing the Aix-Marseille- Provence metropolis.

La Ciotat shipyards strengthen the safety and security of the naval site
9 March 2021
Recent posts
Categories
Go to Top
This website uses cookies to improve your experience. We'll assume you're ok with this, but you can opt-out if you wish. Accept Read more
Read more