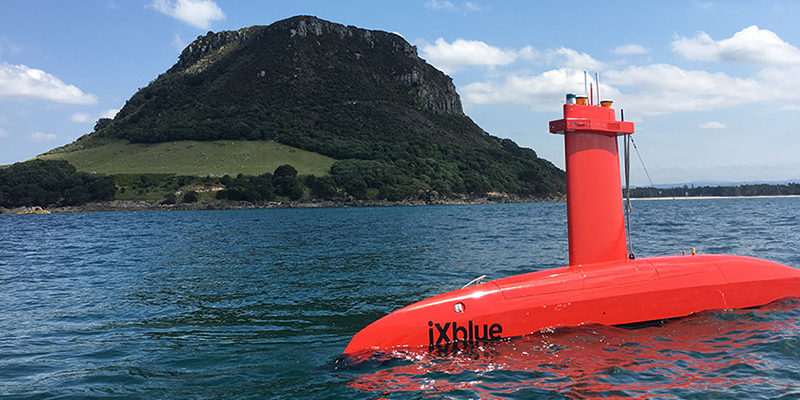 Present in La Ciotat Shipyards since 2003, iXblue is the only operator of the shipyard to manufacture workboats … as well as sonar, AUVs (Autonomous Undermarine Vehicles), and to have an hydrogeophysics and oceanography research division with a presence all around the world! With a new location in La Ciotat coming soon and many other projects, iXblue is also the largest employer in the shipyard, in terms of permanent contracts. Interview with Eric Delort, PhD in Marine Biology specializing in marine environment, and Director of the Survey Division of iXblue in La Ciotat.

LCS: Mr Delort, could you introduce the iXblue group, and especially the Survey division you are in charge of?
Eric Delort: iXblue was originally a small startup specialized in optical technologies and which, thanks to strong investment in R & D, an intelligent policy of external growth and an innovative and decentralized management, has become a group of 650 people, present all around the world. Despite having more than a dozen sales offices internationally, from Rio de Janeiro to Houston, Dubai or Singapore, the company remains a national champion and a champion of the “Made in France” with 100% of our production conducted in the country. We currently have 8 sites in France, with our headquarters in St Germain-en-Laye and of course, our site in La Ciotat, which includes several activities.
In La Ciotat, we build scientific and technical ships, marine drones and all kinds of sonar. It is also, along with Brisbane (Australia), the base for our hydrographic and geophysical service activities for many customers. The common denominator of all these activities is very high technology.
We are one of the few global companies to manage all of our supply chain and production, from optical fiber to the ship, to embedded systems, which gives us a competitive advantage in the “sensitive” sectors (notably defense). We are especially proud that everything is made in France, without the use of external suppliers.
It is true that, among all the companies specialized in yacht and mega-yacht refit, our business may seem rather atypical. It is not that unusual considering that yachts are primarily high-tech items!

LCS: Your division, iXblue Shipbuilding, manufactures one of your flagship products, the DriX …
Eric Delort: Indeed, we manufacture, on the site of La Ciotat, the ASV “DriX”, developed for hydrographic missions, but also available for offshore application. Measuring 7 meters in lenght, DriX is an Autonomous Surface Vessel (although some think it looks like submarine!) equipped with what is best in terms of positioning and anti-collision technologies, such as a multibeam echosounder or sub-bottoms profilers (designed and manufactured by iXblue of course!), intended for underwater surveys.
We also launched a few week ago, the “Speed of Hope”, a service vessel for shipowner Louis Dreyfus Armateurs, sistership of a previous identical vessel delivered last year, the “Speed of Change”, intended for an offshore wind farm in the North Sea.

LCS: What are your plans for 2019?
Eric Delort: We will of course continue to produce DriX, but in a more industrially way, as well as other boats ranges like the “Felix” or multi-mission workboats.
We will also continue to hire on site, at a reasonable but continuous pace of 5 to 10 people per year. We love La Ciotat, and so do our employees, who usually come to settle here, but also start a family. These local roots are essential for us. It is also important to note the good relations between businesses on site, which is the key to potential collaborations.

The partnership Matière/Bardex will build the future 4300t shiplift
13 November 2019
Recent posts
Categories
Go to Top
This website uses cookies to improve your experience. We'll assume you're ok with this, but you can opt-out if you wish. Accept Read more
Read more