You are here:
Manoeuvre 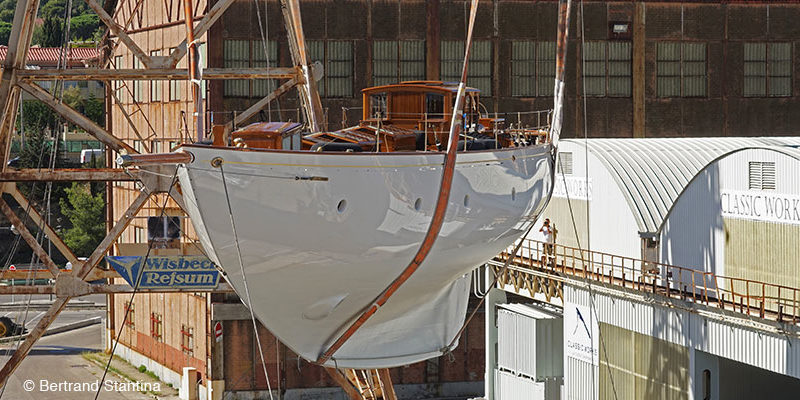 It is an exceptional work that has been completed by the Classic Works’ shipyard, based in La Ciotat Shipyards: the renovation, to superyacht standards, of the schooner “Armide”, built in 1938! A complete state of the art renovation, which involved up to 30 people for 2 ½ years.

See you in 100 years? Beyond a simple restoration, the work meticulously carried out by the Classic Works’ shipyard, and the materials used, notably bronze and copper, have indeed made the Armide almost immortal …

Built in 1938 at the Grassi shipyard in Marseille, the Armide always sailed in the Mediterranean, for cruises or recreational regattas like “Les Voiles de St Tropez”. The schooner was bought 3 years ago when she was moored in the Old Port of La Ciotat. Due to leaks on board, the owner turned to Erik Wirta, President of Classic Works and Alex Laird, Head of the restoration program and co-founder of Classic Works.
The boat was then taken out of the water, and a surveyor was mandated to evaluate the repairs. One thing was clear: the Armide needed a full restoration!

In early 2016, the schooner’s masts were unstepped , the sliding roof was opened and the boat placed inside Classic Works’ workshop. The refit began. “This is a work of unique craftsmanship that has been achieved on the Armide. All timber parts (steam-bent and sawn frames, deck beams and longitudinals) were replaced and the metal floors that reinforce the hull at the keel were redone entirely in bronze, “said Alex Laird. The deck and interior were also completely redone. “We conducted collaborative work with the owner and his representative, the latter present daily at the shipyard, especially on redesigning the layout of the yacht.”

For two and a half years, between 15 and 30 people worked on the restoration of the Armide, including of course many cabinetmakers and carpenters. On December 21, Armide left La Ciotat for her new base in Sanary. Alex Laird watched her sail away with a bit of nostalgia: “It is very rare to work on such a classic yacht, and above all, to conduct a full restoration project, as we have done for the Armide. This happens about every 5 years … ”

Expertise and coordination: dry docking operation for two famous yachts
19 December 2019
Recent posts
Categories
Go to Top
This website uses cookies to improve your experience. We'll assume you're ok with this, but you can opt-out if you wish. Accept Read more
Read more