You are here:
Decoding 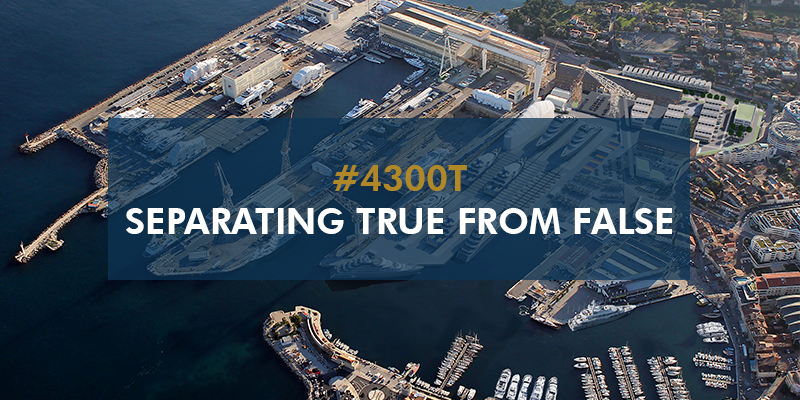 Our company is currently subject to a disinformation campaign on the web and social media providing false or incomplete information. La Ciotat Shipyards wishes to restore the truth in order to allow everyone to separate the true from the false.

LCS is governed by the law of commercial companies and manages the La Ciotat shipyard site at its own risk. It receives no operating subsidies and must cover its operating costs from its operating revenue. On the contrary, the company contributes public finances through the taxes and fees it pays. In 2018, the company paid € 299,249 to the state as part of corporate taxes, € 306,445 to the Department, and € 149,652 in production taxes.

Public authorities have provided financial support for basic port infrastructure which benefits the maritime community as a whole (notably reconstruction of quays). This investment subsidy complies with the European norms for state aid. Furthermore, the amount contributed is quite lower than that observed for port projects of the same type in France and in Europe. In total, these subsidies voted by the Department and to a lesser extent the Region represent € 9.25 million, or less than 15% of the total.

Like any infrastructure project, this project requires investing significant sums over the long term (30 years). For these loan durations, banks are cautious to lend funds without a public guarantee, even for profitable projects. The project was therefore possible thanks to the public shareholding structure of LCS, a guarantee of stability, and to the loan guarantee granted by the City of La Ciotat. This guarantee was voted unanimously by the City Council.

The project will allow LCS, whose shareholders are local communities, to pocket revenues that will greatly exceed the costs of the project. These revenues come from the initial contribution paid by MB 92 (32 million euros) but also from the annual usage and occupancy fees that operators will pay estimated at 1.5 M € / year. In addition, the economic activity generated by the project will increase tax revenues (corporate tax, production taxes, property tax etc.). So it’s a great deal for communities and local taxpayers.

The La Ciotat site specializes in welcoming the largest yachts in the world and is unparalleled in France in this segment. Despite La Ciotat’s strengths, the megayacht sector is subject to fierce competition and we must continue to invest if we want to stay in the race. The two main competing sites of La Ciotat, Genoa and Barcelona, inaugurated in 2019 boat lifts of 4000+ tonnes. It is vital for our site to position itself in this segment so as not to be left behind.

The 4300t project was approved by the Board of Directors, where only local elected representatives sit, as a measure of democratic control. Since the validation of its concept in 2017, this project has also been the subject of numerous publications in the press. A formal consultation procedure was also launched in February 2019 with the publication of a declaration of intent in accordance with the environment code, well before the launch of the public inquiry. No association chose to take part in this consultation.

The National Park has, as part of the legal procedure, gave its assent, that is to say favorable view, on the project with recommendations, which will be taken into account by LCS.

The 4300t project alone will generate around € 50 million in additional turnover for construction sites, which corresponds to 400 jobs created locally.

The 4300t project meets the highest environmental standards, both in the construction phase and in the operational phase. In addition, it will be an opportunity to definitively resolve several recurrent sources of pollution in the bay, in particular through the removal of polluted sediments and the installation of an efficient system for treating runoff water on the platform. At the request of public authorities, the 4300t project will also be an opportunity to reactivate the old tanker anchorages in La Ciotat bay.

The economic assumptions of the project provide for the reception of less than 30 ships per year on the 4300t platform. The platform will benefit from a very high power supply, three times greater than that of the “great drydock”, which will largely allow all the ships accommodated on the quays to be connected to power.

In port matters, referral to the CNDP is only compulsory for projects over € 150 million or over 200 ha. The 4300t project, which represents an investment of between 65 and 70 M €, and covers less than 4 ha, is very far from these thresholds. We are even below the threshold for referral case by case set at € 75 million or 100 ha of area. In addition, no approved association asserted its right of initiative or requested referral to the CNDP within 4 months of the publication of the declaration of intention. The procedures of the environmental code were therefore fully respected.

The company MB 92 was chosen as the project partner after a very demanding competitive process. Within the framework of the contract, the company MB92 will invest more than € 40 million in the project and will pay each year a user fee comprising a fixed part of € 400,000 and a percentage of its turnover. These conditions are much less favorable than those enjoyed for example by Monaco Marine for the 2000t platform.

Historical and heritage study of the old slipway
25 February 2020

ENIM reform: the inside story of the victory of La Ciotat Shipyards, by Patrick Bore
21 March 2018
Recent posts
Categories
Go to Top
This website uses cookies to improve your experience. We'll assume you're ok with this, but you can opt-out if you wish. Accept Read more
Read more